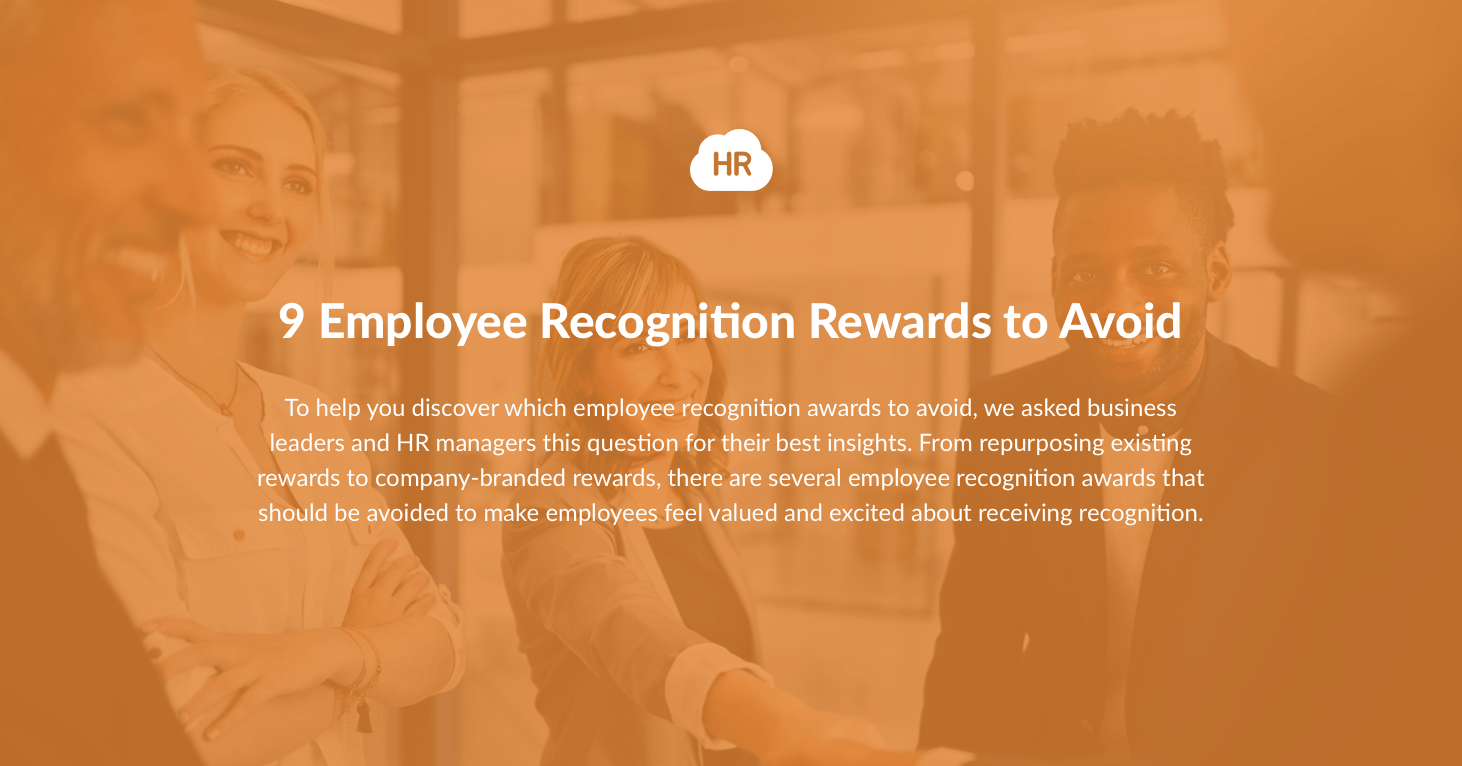 What is one employee recognition reward that should be avoided?

When introducing employee recognition programs, avoid restructuring existing reward systems. For example, by announcing that moving forward the annual bonus will be awarded only to employees of the month instead of the entire team. Limiting or removing existing awards is likely to feel like a punishment or a slight to staff, and team members may feel resentful at having to prove they deserve a perk that was previously promised. Not to mention, suddenly changing the terms of an award can destroy trust. It is better to introduce a new incentive entirely so that employees feel that they have something to gain rather than something to avoid losing.

Never involve pitting employees against each other or singling out somebody as a bad example to show the good. This breeds an untrusting and toxic atmosphere, but it also takes the joy of being recognized away from your star employee. Nobody wants to only be seen as doing well in comparison to somebody who isn't.

It's easy to cross over the fine line between healthy competition and only valuing success when it's in direct comparison with failure. Your employees deserve to be recognized solely for their achievements, and there is no place for others' shortfalls within this particular discussion.

The majority of employees don't get recognized even once a month according to a Gallup poll. Recognition is most effective when the accomplishment or contribution is still current and fresh. Rewarding employees, quarterly makes some impact, but it fails to make any positive impact throughout the weeks between the contribution and its award or recognition. If you reward employees in a timely manner the accolade becomes much more significant and effective. People are more satisfied and more fulfilled when they earn their rewards.

MVP Awards have often been the cornerstone of employee recognition programs. Employee sentiment has drastically changed though and team members want to be recognized for their day-to-day efforts at work. They're not excited about potentially winning a quarterly MVP award. Instead of choosing only one MVP from your team, find ways to reward people consistently. Even if the reward is small, the power of frequent recognition will create more cultural benefit than an MVP award they may or may never win.

5. Avoid Focus Only On Cash Rewards

A major mistake many companies make is focusing only on monetary rewards without considering employees' feedback. This approach may cause employees to leave when they're approached by other companies that are willing to offer them benefits that they truly desire.

To ensure you're giving the right rewards to your employees, businesses could distribute surveys or polls to determine the best benefits for your modern workforce. An anonymous survey can help employees voice out their honest suggestions. This way, you can offer decent rewards that your team actually wants -- such as generous time-off, food vouchers, or a simple public appreciation. This will also give them a reason to be more engaged at work and stay for the long term.

Always remember that an effective recognition program could enhance employees' morale which can lead to higher productivity and business growth. That's why it's crucial to consider your employees' interests and prioritize their well-being.

Gift baskets are one employee recognition reward that should be avoided. This is because they tend to be very expensive and can be quite impersonal. Additionally, gift baskets often contain foods that many people either don't like or are allergic to. Typically people end up giving away the contents that they wouldn't ever use. Avoid gift baskets as rewards as much as possible.

7. Avoid Awards That Can’t be Afforded for All

There are certain rules I’m sticking to when rewarding an employee - never reward an employee with something you can not afford to reward all your employees. Everybody from your team should have the chance to get that reward at some point or at least an equivalent one. Otherwise, the reward may turn into jealousy and avoidance from his/her co-workers due to the fact the rewarded employee shares their position but is treated differently. Such a reward may be a parking space or a new office space, again - something most companies can not afford to give to all their employees. For occasions when an employee is being rewarded I would rather prefer giving a cash reward - a thing everyone would enjoy, a paid day off - a thing everybody needs, especially after a great work done, or an achievement certificate - a thing that may be useful in the future for finding a new job and that lasts forever.

8. Avoid the Meaningless ‘Employee of the Month’ Program

Having worked at several companies, some in which I assisted in the HR department, I have yet to witness a successful Employee of the Month program.

Team members end up viewing this by-the-numbers program as a meaningless gesture. Some come to resent it. There are several reasons for this, including the perception that employees are picked at random to "fill the space" or that management pets are selected. And the "rewards" -- that I've seen range from a better parking space for one month, to a specific-store gift card, to a photo and plaque hanging in the office -- are of little impact, and even insulting when the workforce includes remote workers.

The better option is to recognize employees when it is results-driven, not date-driven, and to provide rewards that actually incentivize team members. For example, as a team lead at ExpertInsuranceReviews.com, our team members are recognized whenever they go above and beyond, and they are rewarded with micro-bonuses for their efforts.

We don't need another logoed item filling our storage or even trash cans as a reward that keeps us feeling unseen. Companies need to focus on the whole employee- what do they care about, what are their likes outside of work and what matters to them. If they care about family, don't be afraid to give extra PTO days as a reward, if they care about charity, give in their name, cookies - yes please! the list goes on. However, take those tacky logo post-its or stress balls out of the rotation and place them in your onboarding process where they belong.

Author Bio:  This article is written by our marketing team at HR Cloud. HR Cloud is dedicated to providing powerful solutions for your HR teams and creating an exceptional employee experience. Our aim is to help your company improve employee engagement, onboarding, and to save you valuable time!

Why is Internal Video content Important for Staff Morale?

For most office-based employees, “work” no longer represents a physical location. In

Covid-19 permanently altered the workplace. As we reach the post-pandemic age, many